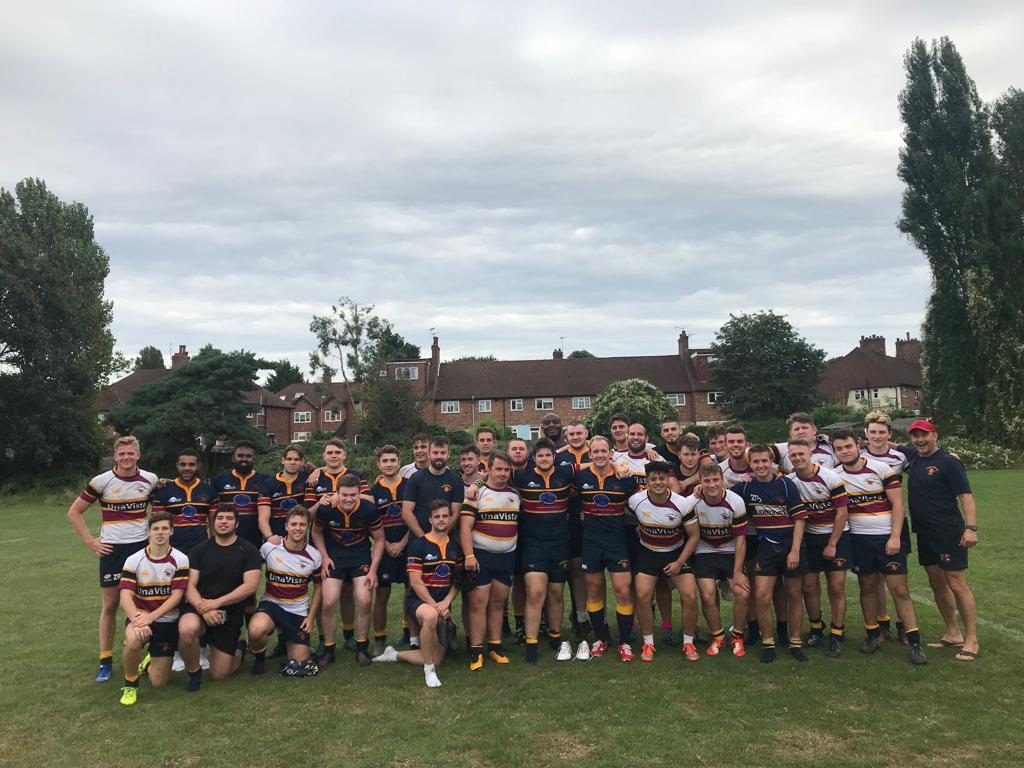 For those of you who may have participated in “intra club matches” you may have some rather interesting memories and experiences.  Certainly for my part such occasions were always played hard and often resulted in bin time for a number of participants as old scores and family disputes were settled or one up-man-ship came to the fore.  So having suggested that as part of our retention initiative our University Lads would give the newly branded Stags team (2ndXV) a game what seemed like a good idea at the time started to take on a more worrying outlook as match day approached.  Pre-season training had been going well in terms of participating numbers with over eighty players present at one time or another and very many new faces to the fore but the key to success would be integration of all these new players!  Was this therefore really a good idea or would it spectacularly backfire?

Social media lit up like New Year’s eve fireworks when the squads were announced late on Friday afternoon and soon thereafter the clubs brains trust were forced to come together to work out how best to harness and keep a lid on this outpouring of emotion.  It was decided that a briefing from the DOR prior to the match would set the tone for the afternoons match.  Well in reality what transpired was a game of rugby played with real commitment, very hard but always within the bounds of the laws and with respect for all.  What on earth had we / I been worried about!

With close to forty players present the DOR took charge of the Stags and treated them to the usual senior club warm up routine whilst yours truly treated the Uni Lads to an under nines warm up whilst trying to meld together a team in the space of sixty minutes.    Some basic structures were discussed and we agreed to hit every ruck going in the first quarter (to try and catch the Stags cold and test the referee early on), play an off loading game, win our lineouts and just lock out the scrum on our own ball leaving the Stags to keep their own through fear that our scrum might otherwise be put to shame.

Well what transpired was a real eye opener.  The Uni Lads receiving the ball proceeded to dominate possession for the first five to ten minutes with multiple attacking phases.  The first scrum coming some five minutes in saw the Uni pack totally ignore the coaches instructions and demolish the Stags scrum turning the ball over in the process.  In fairness I think the Stags scrum was caught cold and improved significantly thereafter. Eventually multi -phase pressure told and Big Sam R-F was on hand to crash over round the fringes for the first score of the afternoon neatly converted by Huw C-M.  How many hyphenated surnames do we have in this club?  Eventually the Stags got themselves together with the big guys Dele (when not otherwise attending to injured players that he in all probability caused) and Bill Ramdhan carrying hard and Sean Parkinson leading the charge in defence.

Eventually the Stags worked their way up field where Dele was presented with a run in or is that run over opportunity from five metres out!  Unfortunately the conversion was missed by Ryan Napper but this had more to do with not wanting to lose the match ball in the Amazon Jungle behind the posts and therefore having to kick a sacrificial pillow instead!

Half time arrived some sixty minutes after kick off and not before it was decided to call uncontested scrums due to the high number of injuries being sustained.  In fairness to the referee he was stopping the watch at every injury break!

The second half commenced with much the same and the Uni Lads sticking to a tip plan then releasing wide however the narrowness of the pitch and a fine defensive effort on the part of the Stags nullified most of these attacks.  In reality the Uni Lads needed to change things up and get the ball in behind the Stags but this wonderful tactical epiphany only came to the coach about the time of his third pint back at the club!

As the Stags generated more cohesion and the heat started to take its toll the game began to open up and a couple of fine strike moves from the Stags backs firstly saw Luke Benson make good ground up the right wing and thereafter a second move run off Tyler Babb resulted in further good field position.

Eventually after a sustained period on the Uni Lads line the defence was breached when James Axon was able to snipe around the fringe and dot down.  This time, with no Amazon Jungle to contend with, Ryan Napper added the extras.  Into the final quarter the game was very much in the balance until Dele was presented with an open door opportunity on his ten metre line and proceeded to barnstorm his way forty metres up field until being dragged down by a pack of rabid hyenas and subsequently penalised by the slightly apprehensive referee for holding on but much to the referees surprise and relief responded with a “yes sir you are absolutely right“, or words to that effect!

The Uni Lads cleared to touch, secured their lineout then proceed to play their phases again however faced with an impenetrable defensive wall tried to force the play with a wide pass which was picked off by I think Max Collett (apologies if this is wrong)  who ran in from forty metres out.  Ryan again added the extras.  The match finished up with the Uni Lads camped on the Stags line and it was only a trademark turn over effected by loaned across  Uni  Lad Morgan Smith that stopped the Uni Lads registering an otherwise deserved consolation try.  With the final whistle blown it was with immense pride and relief to observe all players embracing and congratulating each other on what all knew had been a full on entertaining game of rugby.

A special mention must go to our recently qualified in house referee Rob Gardner.  Yes you heard it right another of the long list of refereeing Gardner’s only this time this one was officially appointed to adjudicate!   Refereeing his first senior game he was thrown in at the deep end but came out the other side with flying colours and with a great deal of new found experience particularly in the intricacies of the tackle area and ruck where the lads very kindly demonstrated the full range of misdemeanours that any referee could wish to legislate on.  It will stand him in good stead, so big thanks and very well done Rob.

So in conclusion was it worth it?  Well damn right it was!  A great game was played, many new faces participated, there was a great spirit and esprit de corps and the Stags kicked off a new era for the club with a hard fought win.  The Uni Lads played their part to the full and we look forward to their permanent return to the club in the not too distant future.  Factor in the majority of the clubs longer standing senior players being given a day off and a number of committed players old and new unavailable due to injuries and other long standing commitments we as a club are looking at a very bright future with three regular and we hope competitive match day squads regularly turning out throughout the season.

We all know it will not be easy and we will have ups and downs along the way but when we all pull together and maintain a never say die attitude we will be successful.  Surely we cannot wish for anything more. Steve Edwards.