Sunshine, tries aplenty and a coffee cup for the Crimsons U15s 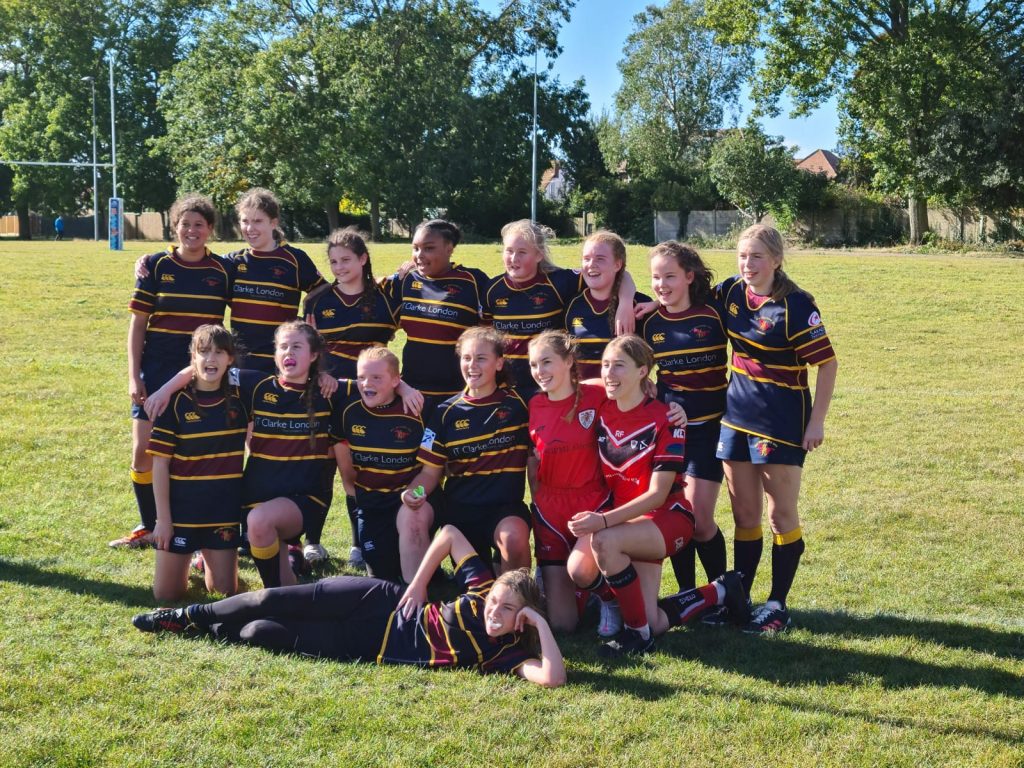 A long journey to the south coast venue of Thanet Wanderers, compounded by the petrol shortage, meant some of the team travelled by train, showing just how committed they all are. The weather looked decidedly average on the journey there, but we were soon rewarded with some sunshine, to match our style of rugby!

A good warm-up saw us ready to play, with good numbers. We have not played the opposition, East Kent Viragos, before so we were unsure how this was going to go. But the U15’s were definitely up for the game. It was decided that we’d play 3 x 20 minute halves, which on a HUGE pitch, would surely test the fitness of the girls, playing 13 a side.

The early encounters were a bit frantic, with neither side exerting any dominance and a good few knock-ons called by the eagle eyed referee. The girls got to practice their scrummaging quite a bit in the first five minutes.

Then we got a breakthrough, some excellent rucking saw a turnover and a good move for Mia Millan score under the posts. Now came a first for the u15s – a conversion. It’s fortunate that in the warm-up we had been through an extensive and rigorous selection process for our kicker (ahem!). Up stepped Amelie and slotted the first kick (old school style, straight from the ground) through the posts: 7-0!

At this point, the coaches realised we didn’t have a kicking tee. So we stole someone’s take-away coffee cup and fashioned a kicking tee from it!

Then we started a sustained period of dominance at the contact area, ruck and scrum, which meant we scored more tries through Brooke, Mia Evans, Ruby and Mia Evans again. The team were finding space on the wings and using their speed and skill to very good effect. The coffee cup was now being run onto the pitch at frequent intervals for Amelie to slot more conversions. Some parents were initially sceptical of the coffee cup tee, but they were now believing it needed to be preserved for the next match!

Our defence was excellent throughout the game, with tackles being made and turnovers coming regularly. Only conceding two tries in 60 minutes with 13-a-side on a full size pitch shows how well we operated.

In the final third, the EK Viragos had a few injuries and we ended up at 10-a-side, meaning we lost a bit of shape and structure and conceded a late try just before the full-time whistle.

There wasn’t a huge amount between the two teams, but we had the edge in all the right areas of the pitch and it showed in the final score of 64-10.

A great first run out for the u15s. Loads to work on, but a really positive start to the season for the team.

Huge thanks go to Thanet Wanderers for hosting us. And a massive thank you to the Dartford Valley coaches too, the girls make a great team.