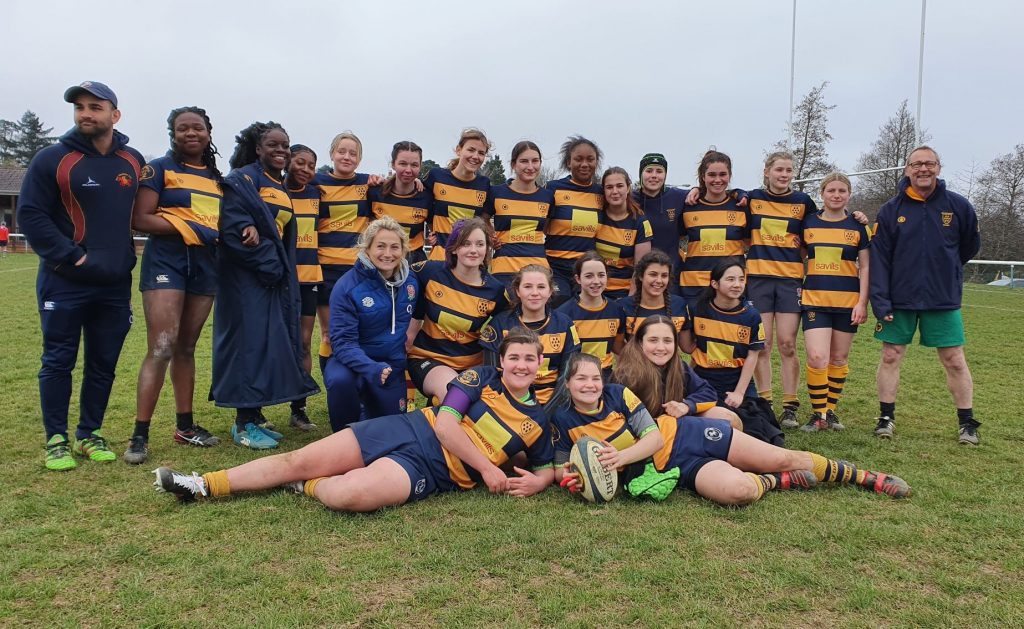 On Sunday 27 March, the Crimsons U18s (the combined Sevenoaks/Old Colfeians/Dartfordians girls) were at Sevenoaks for the first round of the Kent Cup against the Medway Lightening team.

From the start our girls looked strong as they practiced their drills before the game. And within the first few minutes from the kick-off, Natalie and Lara combined well and when Lara was tackled just before the try line, she was able to play the ball back to Natalie who went over for the first try. No conversion.

Play was quite even in the middle of the field for some minutes, before Lara stripped the ball from a Medway player, and spotting space in the backfield, kicked in behind, which Ivana ran onto and scored the second. No conversion 10-0.

From the restart Medway powered up the left side but were stopped when Alice bundled the storming winger into touch. With a solid lineout, the Crimsons were off up the pitch, and a kick-chase from Annabel almost resulted in a try for Joan. A penalty for the Crimsons near the try line and a clever switch-move saw Izzy run in under the posts. Conversion by Lara, 17-0.

Then it was Medway’s turn to show some pressure and despite some strong defending from the Crimsons, they scored in the left corner. No conversion 17-5.

Following some even play in the middle of the field, the Crimsons had a penalty in front of the posts: Lara tapped and passed to Natalie who powered through to score the fourth try under the posts. Conversion from Lara, 24-5.

From the restart and some resolute defence by both teams, Charlotte B made a fantastic run down the left and managed a lovely offload back inside: the Crimsons patiently applied pressure near the try line which resulted in another try for Izzy. No conversion 29-5.

In the last play before half time, Lucy and Natalie powered through the middle in tandem, and following a Medway scrum and kick, the Crimsons regathered the ball which Lara kicked cross-field, Charlotte W gathered and cleverly offloaded in the tackle for Lara to score. No conversion 34-5.

The second half saw the balance of the game change as some of the stronger Crimsons players came off, and Medway immediately pressured the line. Despite some immense defence from everyone, with Lucy in the forefront, Medway scored to make it 34-10.

Two injuries to Medway who were without subs, took the players on the pitch down to 12 each and Medway were able to apply more pressure and score a third to make the score 34-15. A few minutes later saw another try to Medway in the left corner, no conversion 34-20.

From the restart, some good strong running from the Crimsons led to a lineout near the try line. They were knocked back and went again: Lara kicked and almost chased successfully but Medway secured a goal line drop out, which they successfully gathered and ran down the left wing to score under the posts. The conversion made the score 34-27.

Following a penalty to Crimsons, and with the clock dead, rather than kick the ball dead and finish the game Lara decided to run the penalty; she tapped and passed to Izzy who went forward and offloaded to Joan who scored the last try of the match. No conversion made the final score 39-27. The quality of offloads in the tackle was a particular strength and helped send the Crimsons into the Cup final against Medway Thunder, to be played at Medway on 2 May.