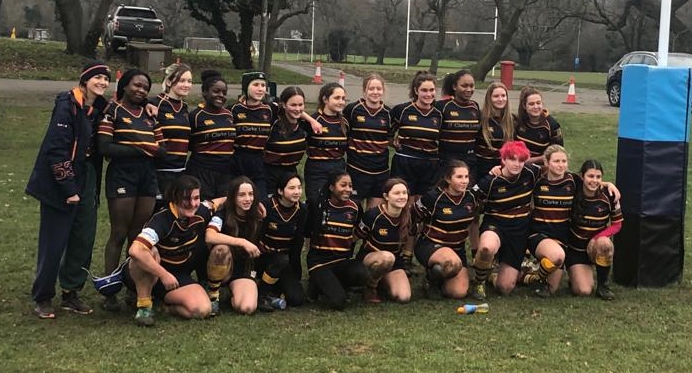 On Sunday, the Crimsons – the combined Old Colfeians/Sevenoaks U18s – were away to Old Alleynians. With the absence of Lara, the team were moved around a little and Alice started at 10.

The Crimsons started strongly, and after five minutes had a huge scrum in OAs half. The defensive pressure from the backs then led to a turnover from Bolu, and Joan ran it in to score. Izzy added the extras. 7-0

From the kick-off, the Crimsons slowly edged their way back into OAs half, where they stayed for some time. The ball was back and forth between the teams with the referee letting the game flow through playing advantage where possible.

It was the hosts who then built the phases to get within 10m of the try line. A huge defensive effort from the Crimsons led to a turnover by Natalie and the ball being moved to Bolu who made a lightning run and offloaded to Izzy who charged into the opposition 22. After drawing in the players with a couple of picks, Iona then sniped from the back of the breakdown and dived over to score the next points for the visitors. Con missed. 12-0

OAs didn’t take the two quick scores from the Crimsons lightly, and came back fighting. Although Ivanna made a fantastic try-saving tackle, OAs were too quick in support and managed to score off the next phase. No con. 12-5

Another turnover for Bolu then led to break up the middle of the field by Hannah, followed by Izzy again on the charge and a third score for the Crimsons. Con missed. 17-5

Crimsons lost a line out in their 22, and OAs were quickest to react, pouncing on the ball, and running it in to score. Con missed. 17-10

OAs started to take the upper hand toward the end of the first half. A scrum on the halfway line saw their number 8 pick and go, with some missed tackles from the Crimsons, and a big run in, OAs had scored again. Con was good to make it even Stevens. 17-17

The final play of the half was in the Crimsons favour and with a scrum in OAs 22, Natalie picked from the base of the scrum to score. Con from Alice was good. Crimsons lead 24-17 at half time.

The second half started with OAs building the phases yet again. But a poor pass saw Iona on the ball and it was moved through the hands to Bolu on the wing who strode out into the opposition half.

After some to-ing and fro-ing of possession, OAs managed some sustained pressure in the Crimsons half and eventually went on to score in the corner and were back within 2 points. 24-22

Big mention to Raphaelle on her debut who started her rugby career with a bang and two great tackles.

A scrum around half way, led to another pick-up from the base although Natalie was stopped just short of the try line before OAs infringed at the ruck. Crimsons then scored from the penalty with Izzy diving over from short range. No con. 29-22

With the lead, Crimsons started to play some champagne rugby and offloading like a barbarian side. Marianna, Iona, Joan and Izzy all keeping the ball alive, for Amy to slice through a gap with a show-and-go and Charlotte scored in the corner. Con was close, hitting the bar but did not go over. 34-22

Great Crimsons defence saw Izzy go in under the posts after a 40m breakaway try. 39-22 Another great run from Hannah led to further offloads, this time for Izzy to make a break and get stopped just short of the line, and then Natalie scoring under the posts which was converted by Izzy to end the game. 46-22