After a good start to 2019, Old Colfeians picked up the full 5 points away in the bullring against a much improved Aylesford side.

Although OC’s achieved a convincing win in the home fixture, we were under no illusions that Aylesford Bulls would have improved and come out charging in their own arena. With the weather being relatively mild for a late January game, it looked like perfect conditions for rugby. After a lengthy amount of time Sam ‘Trippier’ Wallis figured out how to use the high tech speaker and we could begin.

The game began with a comfortable spell of defending for OC’s with both sides matching each other with a high level of physicality. This however took its toll on Aylesford, as a big tackle in the midfield led to a sharp counterattack by the OC’s backline. The ball found its way to debutant Christian Hooper, after a dubious forward pass by Ed Livett, Christian placed a delicate chip over the top of his opposite winger and with the kind bounce of the ball, went over for the first try of the match. Jack Potter with the conversion.

After the first score, OC’s found themselves with the majority of the possession with strong carries from Ed Livett and Jack McCusker. However Aylesford began to make a mess of the breakdown leading to a wayward pass which Aylesford’s number 7 picked up and ran in from near the halfway line, showing the speed of a winger, which we later found out to be the case. Conversion successful.

This score however did not change the flow of the game, as OC’s continued to have the majority of the possession but struggled to make any strides towards the Aylesford try line. This possession caused a string of penalties leading to Jack Potter slotting 3 points from in front of the sticks, OC’s happy to see he’s managed to get his kicking tee fixed.

After further penalties conceded by The Bulls, the ref finally went to his pocket giving Aylesford number 6 a 10 minute rest, a sight we are sure he’s used to seeing throughout his career. OC’s didn’t take long to make use of the extra man, with a neat string of passes along the backline finding the boy wonder Christian Hooper to acrobatically finish in the corner or his second of the game. Missed conversion.

After stern debrief in the changing room at half time, OC’s came out in the second half to fix the problems seen in the first. The physicality however did not falter, with the not so secret weapon ‘retired physio’ Dele continuing to put the fear in oppositions across the south east with his carrying. Good field position and a well worked driving line out led to a try for Jack McCusker, a testament to his strong carrying throughout the 80 minutes that his now Aussie predecessor Freddie Berridge would be proud of. Conversion missed and thoughts returned that maybe Potter hasn’t in fact got his tee fixed.

Ill discipline in the OC’s defensive line gave up valuable field position, allowing Aylesford to pump the ball into the corner. Despite having good success against the Aylesford line out, a well worked move led to a score in the corner for the Bulls. Conversion missed.

A good response from OC’s was led by a spell of dominance in the scrum, leading to a penalty kicked to the corner. An attacking line out led to familiar sight, a strong driving maul ending in another try this season for front rower Chris O’Malley who continues to worry the backline for the top try scorer this season. Jack Potter with a more simple conversion.

Straight from the kick off, OC’s once again seemed to relax too much. The usually reliable El Matador Jack Potter, must have looked up at the wrong time at the on rushing Bulls, spilling the ball straight into an Aylesford’s hands leading to the final score of the game. Conversion unsuccessful.

Not the prettiest of games from an OC’s point of view and knowing we are a long way off from the levels we know we can play at, a vital 5 points were gained which was the main target at the beginning of the day. Good performances from both centres led to Trevor the MOTM bear going to Jack McCusker, a home he must be getting used to. Special mentions must go to young Bulls Christian Hooper and Matt Krizek on their first starts for the first team. 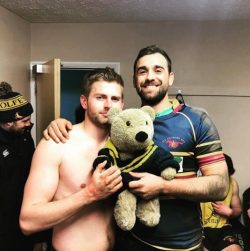 Next week sees the beginning of a tough run into the end of the season, starting with Horsham at home in the Cup. A big week in training to attend to the easy fixes, in order for us to continue our way to Twickenham. Looking forward to seeing great support next week. Everyone loves the cup!!