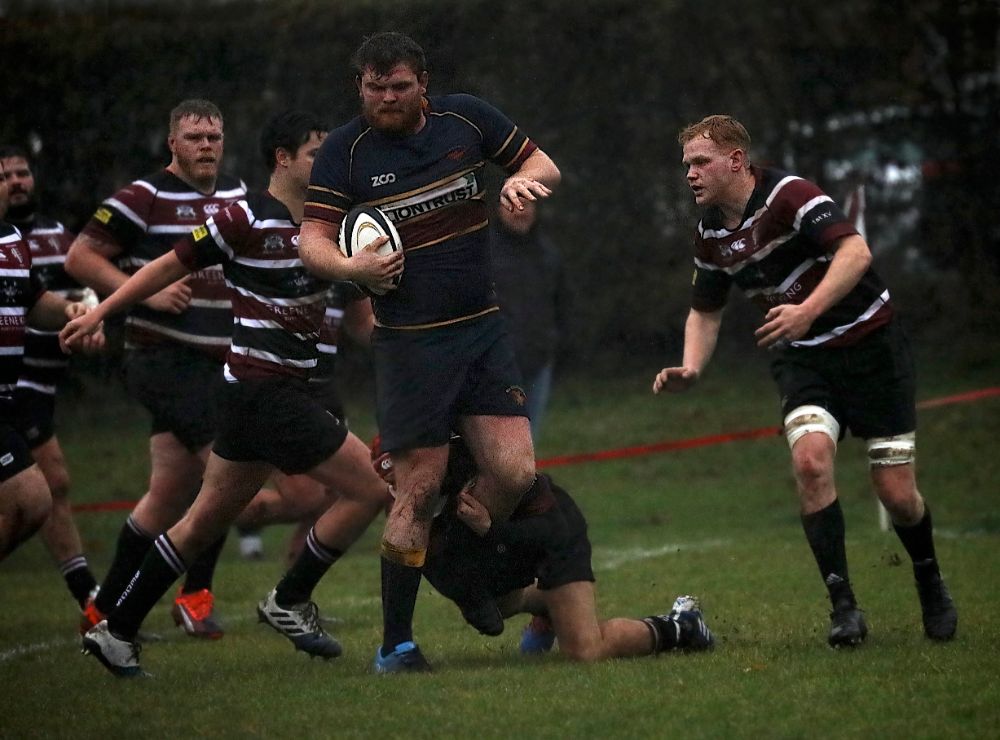 It was a cold and damp morning when OC’s travelled the short distance to Mt. Beccehamian – a suitable title for a pitch that was more in keeping with the wilds of the Scottish Highlands than a place to play rugby. Newly promoted to LSE2 and coming in off the back of some good results, OC’s knew they needed to front up for a dominant display against a Beccehamian side who would be keen to take another scalp in the league. With the weather looking slippery, the backs nodded wisely and decided it was to be a forwards day. As there had been too much team consistency various changes were enforced on the team – with forwards powerhouse Chris O’Malley away, it fell to Dele Agorioge to slot in for the daunting task of a historical full 80 minutes on the pitch, a 1st team debut for Ross Gladdish and late call up for Max Collet to bolster the backs.

It was clear this was going to be a tight match from the oppening salvos, OC’s were attacking down the slope for the first half and Beccehamian were fired up and lively on their mountainous home ground. The initial set pieces demonstrated this was not all going to be OC’s way with a solid scrum from Beccehamian putting OC’s under pressure. Their kicking game was used to good effect and an unhappy day for the OC back three led to them being rewarded with terriorty. However, a solid and organised defence from OC kept them at bay and forcing the eventual turnovers. A penatly in the Beccehamian half was duly punished with 3 points and OC’s led 3-0.

Some gambolling runs from Andy ‘Black Lung’ O’Malley and Dele started to break the Beccehamian lines but a lack of support in the breakdown led to easy turnovers for Beccehamian. However, more direct running and strong support in the breakdown let to smooth hands and excellent offloading giving OC’s the opening try of the match with Captain Josh Fletcher bursting over the line for the score – with Potter sadly failing to find the conversion.

Following this try, OC’s were determined not to give away any cheap scores, so, naturally, gifted Beccehamians a penalty which they obligingly knocked over to bring the score to 5-3.

At this point, AOM decided he was finding it far too easy playing 8 and volunteered himself for a spell in the front row, giving Dele some much appreciated recovery time. This change immediately bore fruit for Beccehamians at the next scrum and earning them a penalty, something about AOM and his legs being in the wrong position was the muttered excuse… Some outstanding defence from OC’s, under sustained pressure in their own half and on their try line would see out the remainder of the half and give them some positivity going into the second.

With the scoreline 8-3 at HT, the focus was on working on our breakdown support and playing the OC pattern that had been somewhat lacking from and to build on the outstanding defence effort shown so far. However, we had neglected to account for the full support of gravity that Beccehamians now had. Some strong running and a loss of concentration in the midfiled meant Beccehamian were clean through the OC line and despite a covering tackle causing a blatant knock on, the try was awarded to Beccehamian.

With a drawn score the match became tense as each side sensed the next score would be decisive. The OC’s defence held strong and pressure began to tell as Beccehamian were forced back into their own half and eventually conceding the penalty which Potter slotted giving OC’s the lead. Beccehamian gathered the restart and using all the mountainous terrain at their disposal, made it into the OC’s 22 and began to apply pressure. The defensive effort from the boys was immense, resulting in a turnover. Some not-quite-so calm slow ball management saw the clock run down the and ball kicked to touch giving OC’s the deserved win with a large slice of relief.

Tough conditions and a determinted opposition who will cause plenty of problems for teams in the league, this was a solid win that lifts OC’s to 3rd in the league with a crunch match against Hove RFC next week. Special mentions to Ross Gladdish on his debut and for a solid defensive effort with Angus Dalgliesh.