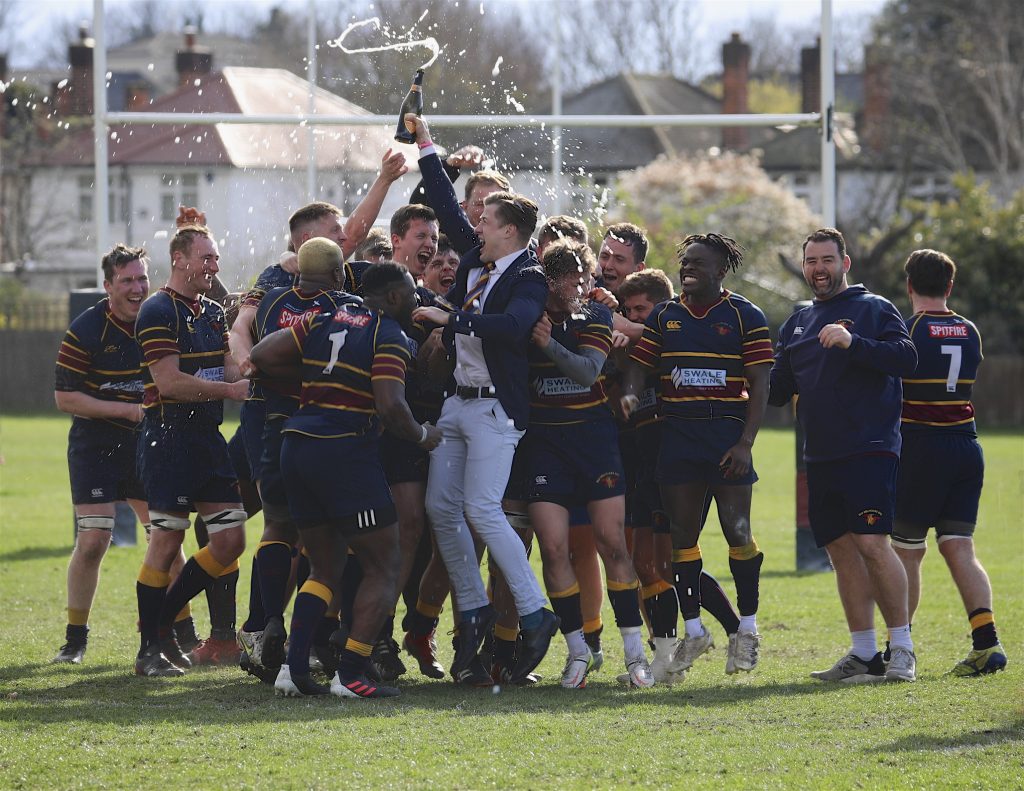 Going into the final game of the season against Thanet, Old Colfeians were 1st in the table, 4 points ahead of 2nd place. The club had not won the league for 20 years. Whatever results happened in the other games, OCs knew a win would take them to the title.

With the club organising a fundraiser in ‘Ladies Day’ plus the Past Players lunch, a large crowd amassed upon Horn Park with the hope of witnessing history.

Ollie Burkett kickstarted the game with a perfectly weighted kick meaning Thanet’s forward was met by 3 of the paciest players in the club in Alex Verissimo, Brendan McMillan & Daniel Dunbar. This contributed to early pressure applied to Thanet, allowing Will ‘Jiggy’ Smith to break the line & taking the ball to the opposition 5. Relentless pressure resulted in 3 penalties & 3 dominant scrums ending with a strong pick from the base leftwards by Andy O’Malley. Switching the ball to the opposite direction quickly was complemented by a step & fend from Brendan McMillan to set up his, & OCs, first score of the afternoon. Burkett adds the extras to make the score 7-0.

After the restart, & despite being pinned back in their own 22, a key turnover from Andy O’Malley leads to an OCs penalty 10 minutes in. Thanet resist OCs attacking pressure causing a knock-on. From the resulting scrum, Thanet go wide, but are met with fierce defensive energy from the backs, taking the opposition into touch to win a lineout. The resulting maul leads to a 15 metre gain before Brendan peels off the back & makes another 5 metres. The backs’ slick hands take the ball wide. 2 forward carries by Andy O’Malley & then Tom Rameaux means the ball is now centre field. Quick hands from Josh Doughty & Jiggy shift the ball out wide. Angus Dalgleish picks up the resulting spillage, before tidily scoring. 12-0. Burkett converts right in front of the home crowd to make the score 14-0.

Later in the game, a class nudge from Burkett gives OCs a lineout on the opposition 5. Once again Daniel Dunbar wins the ball in the air, & off the following lineout which appeared splintered, Brendon appears like a lightning bolt to speed in-between a gap & shoot over for his 2nd try of the day. 19-0. Burkett converts to take the score to 21-0.

35 minutes into the game, & realising the title is at stake, complete focus means an OCs scrum moves metres rapidly allowing John Fletcher to pop the ball up to Josh Doughty who shoves a bouncer at Angus Dalgleish’s ankles whilst whispering ‘have that’ under his breath. Despite the ball being at his ankles, Angus somehow takes the ball cleanly, applies the dancing feet as he beats 4 defenders & scores. 26-0. Burkett converts. Score now poised at 28-0.

A strong defensive effort from the backs prevents Thanet from scoring before halftime.

Emerging from the changing room after the half time team talk was Dele Agorioge, with strange white liquid covering his head.

Thanet apply solid pressure from the restart meaning OCs have a lineout on their own 5. OCs take the ball smoothly & exit after one phase. The chase is followed up by a solid double hit from Freddie Berridge & Jiggy, & then a rip meaning all of a sudden Sam Wallis has the ball going forward near the halfway. Another carry before slick hands involving a layered attack & plenty of drawing & giving results in Ade Lipede getting the ball out wide. Ade backs himself, hands off the man inside him leaving him for dead, steps inside & the gas is too much. Ade scores. The extras are added by Burkett & the scoreboard reads 35-0.

Sam Wallis mixed clever runs with great offloads in attack, whilst being able to demonstrate defensive soundness with a key turnover. This combined with Ollie Burkett running nice support lines to give OCs good field position. The consequent attacking pressure caused Thanet to go off their feet, winning OCs a penalty & a lineout 7 metres out. A slick collection in the air from Charlie Baker leads to nice out the back hands from Jack Griffiths to allow Burkett to walk one over with comfort. 42-0. Extras are added to make it 42-0.

On the sixty minute mark, solid scrummaging pressure applied by Ladi Ariyo & Dele Agorioge gave the backs a nice platform to ship the ball to Ade. Faced with the chance to take the space, Ade Backs himself stepping wide & going over for his second. 47-0.

OCs exit having received KO. A Thanet prop collects the ball & ‘sprints’ towards Brendan McMillan mistakenly. Packing that punch, Brendan delivers one hell of a dump tackle with the resulting impact registering a 7 on the Richter scale.

A nice kick from Jiggy bounces wonderfully in the path of the oncoming pace man Freddie Berridge. the penalty that results from the oncoming pressure means OCs opt for a scrum. Class hands from the backs fixing each man then allows Berridge to go over out wide. 52-0.

With 10 minutes left, Thanet have the courage to take two quick tap penalties, before shifting the ball out wide quickly. An inside support line from their 9, who brought lots of energy all game, allowed him to collect the ball & shoot over for a fine score. Complements to Thanet for never giving in. The home crowd appreciated this fightback with applause. The score is converted to make it 52-7.

Finally, good attacking pressure is applied from OCs. Josh Doughty gives the ball from the breakdown & three passes from OCs forwards shifts the ball 3/4s of the width of the pitch, allowing Brendon to secure the Hat Trick. 59-7.

It is worth noting that 100% lineout success on the final day of the season was due to the hard work of the orchestrator, Dan Wood.

Soon after the final whistle is blown, with a final score of 59-7. This is met by cheers as OCs realise their first league trophy for 20 years.

Old Colfeians Rugby Club are crowned London 2 South East Champions, registering 88 points for the season with a record of 22 games played, 18 Wins, 1 Draw & 3 Losses. Points for was 649 (the highest in the league), points against was 273 (the lowest in the league) meaning a difference of positive 376.

Credit is owed to the coaches in Tom Chapman, Henry & Alan Bateson. Thorough work on detail throughout the season resulted in this historic day for the club.

Asides from the coaches, further thanks goes to all squad members who played for Old Colfeians RFC in the 2021/2022 season, as well as those senior club members organising behind the scenes, including DOR Adam Hodgkiss. This league trophy is a result of the hard work of all.