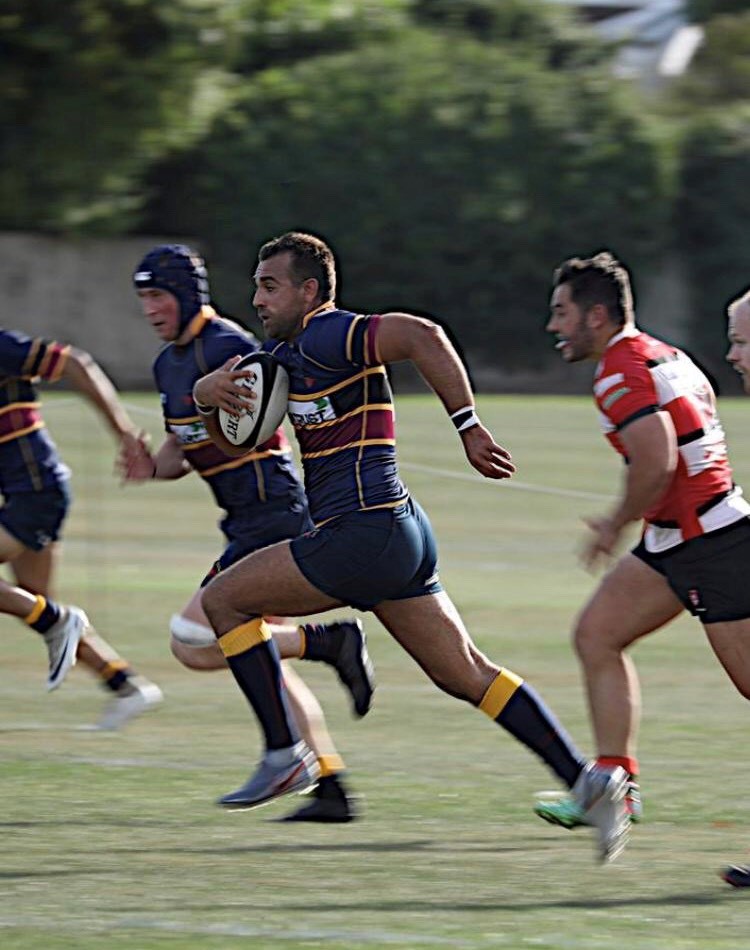 This weekend see’s 1XV stalwart Ed Livett make his 200th appearance for the club, a great achievement I’m sure you will all agree.

I’ve been lucky enough to know Ed for nearly fifteen years. We first played sport together for Colfe’s School XI Cricket along with a few other current and past players. A 12-year-old Jack Potter, onetime cricket ‘wonder kid’ (one in a long list from Colfe’s who never quite made it), James Poole, Johnnie Mac and Steve Howard, who had left Colfe’s the year before! I had to wait another 6 years to play rugby alongside him, which came at the start of the 2013/14 season, my 1st cap for the 1’s. A memorable game for all the wrong reasons as a rampant Maidstone racked up a 0-77 victory at Horn Park. Ed played full back that day so I’m sure he enjoyed it as much as I did…

Over the years Ed has gone above and beyond for the club, his recent car history for example. A Land Rover Discovery then a VW truck, just to help with tow the flood lights. I can’t see any other reason for a man with no children living in Central London to own those cars? His most recent purchase was 12 training bibs from Sports Direct for £50, they lasted all of 2 sessions before being shredded to pieces.

But my favourite story of all involves his old roommate Johnnie Mac. Johnnie received a grand unveiling as the new Club Captain for the 2013/14 season, only to leave for Hong Kong the next year. Up steps his VC Ed to skipper the side for the entire 2014/15 season. Cue Ed’s surprise when the illustrious Captain’s board was updated, and it was in fact Johnnies name down for the 2014/15 campaign and not his own! Johnnie having not even played a game, let alone captained one. Ed is currently VC for John Fletcher, the 4th captain he has had the role for, always a bridesmaid….

I have asked a few friendly faces to also share some memories.

Martin Davey had this to say on Ed:

200 First XV games, what an achievement in the modern game of rugby. Ed is genuinely one of the nicest blokes you will ever met in rugby or everyday life. In 12 years of first team rugby there has been no finer exponent of a grubber kick rather than utilising a 2 man overlap. Conrgats and here’s to 200 more.

Being carried out pre starters at his first ever Club Supper and Playing at home, Ed went down in a heap with a very high-pitched squeal and insisted on being subbed. A post game Tray was served up for ‘being soft’ followed by a night out in O’Neil’s. A trip to A&E the next morning revealed a broken leg and months on the side line!

Having played 1XV rugby with Ed for 8 years he was never the fastest, never the strongest, never the most skilful, but always operated with guile and on occasion intelligence. For me, nothing typifies this more than a story from a pre-season tour to Dorset. After a great weekend the team were blowing off steam in a local nightclub. Safe to say 20 rugby players from London were stealing some of the attention on the dance floor from the local punters. One such local took umbrage to our presence and approached Ed.

“You got a problem mate?” He said.

“Well if you do…” said Ed gesturing to Dele blissfully unaware on the middle of the dance floor, “…take it up with HIM”

Having played with Ed when he 1st arrived at the club when he was the young, skinny, good looking one to now being his DOR and him being the older player trying to squeeze into the same shorts but apparently still good looking it was always clear his commitment was there and that has never changed. It is no surprise to me that he has reached 200 caps, commitment to the club and to his team mates is what any club would want! A great achievement and something Ed should be very proud of, although another 150 to go if he wants to catch me up!

His partner in crime in the centres last year Freddie Berridge:

Three sentences to sum Ed up… Great bloke, consistently average on the pitch and loves the physio room

And finally, the man himself. I was lucky enough to grab 5 minutes of his time and this is what he had to say:

Pre game superstition/habit? I listen to “Eye of the tiger” in the Car on the way to every game. Gets me where I need to be. . .

Best game? Hard to look past the Camberley away play-off win but for me Beckenham @ home 2016?! silencing the partisan Beckenham support and securing that play-off spot was unforgettable.

Most memorable off field moment? Witnessing the enigmatic Paul Needham sing- Copacabana in his nasal dulcet Northern tone on a bus after his 1XV debut. The songs never sounded the same since . . .

Favourite player and why? Hugh Mac – influencer in the changing room and the hardest tackler I’ve seen. Class on the pitch, class on the pi . . .

Fav away day? Deal and Betteshanger . . . but only when Terry Allen is available.

*If selected, let’s hope the boys can deliver for ‘Smasher’ this Saturday at Crowborough!