Not all plain sailing on the coast 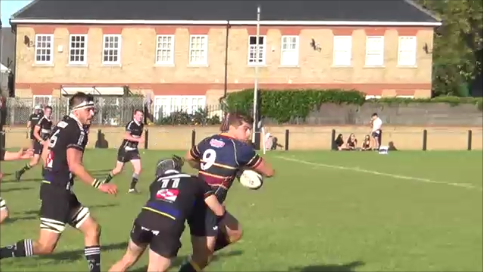 Following a comprehensive home win against Heathfield & Waldron the previous week, OC’s hoped to carry their form on to the road when making the trip to the coast and visiting Deal and Bettershanger.

Bright sunshine and minimal winds provided neigh on perfect conditions and OC’s hoped to make a strong start and pick up where they left off the previous week.

Unfortunately, things didn’t go quiet to plan and it was D&B who seemed to be controlling the game in the early exchanges, as OC’s struggled to retain possession off their own set piece.

A lost Colfeians lineout on the half way mark gave possession to the home side, who capitalised and broke the line leaving a simple two on one in the backfield to rack up the first score of the afternoon.

Another try soon followed for the home side as the D&B fullback collected a wayward kick and broke through the OC’s chasing line to dot down under the sticks.

For the first time in the afternoon OC’s began to establish longer periods of possessions as they looked to maintain the ball and build upon their phase play, leading to a penalty on the Deal 22. Number 10 Jack Potter duly obliged and took the 3 points on offer.

Both sides struggled to maintain possession and build any momentum for the next period of the game until OC’s were awarded a penalty on the half way line, Potter putting the OC’s pack in a great position, finding touch within 5m of the try line. OC’s secured the lineout and the driving maul ensued, John Fletcher dotting down to finish a well worked forwards try.

The men from Horne Park continued to pressure the D&B line, numerous mistakes allowing the home team to clear their lines on more than one occasion, with no more points scored as the first half came to a frustrating end.

The second half started brightly for OC’s, an early free kick awarded at a scrum close to the home teams line, allowed Number 8 Andy O’Malley to take a quick tap and offload to winger Freddie Berridge, who was held up short by D&B defence. The following phase saw Tom Rameaux crashing over the line next to the upright.

The game continued in a back and forth between both teams, neither taking full control of the game nor being able to establish a foothold, numerous mistakes on both sides turning ball over from one side to the next. A period of sustained pressure by D&B led to a scrum being awarded to the home side 5yards from OC’s line, the ball shipped quickly from the back of the scrum saw the D&B back line break through the away teams defence for the try.

OC’s were quick to respond with possibly their best phase of play in the game, Andy O’Malley once again breaking the line within the opposition 22 before being brought down at the 10, managing to offload the ball in the process, the ball moved through numerous players hands before Estefan Ellis finished the move in the corner. Proof of what OC’s were capable of but were not delivering on a regular basis throughout the match.

OC’s struck again shorty after, once again showing what they were capable of when they strung together phases, a well worked move in the midfield releasing Ellis into the corner to bag  his brace for the day, touching down in near identical location to his first.

Deal seemed to have one last assault of the OC’s line left, building multiple phases within the away teams 22, Eventually breaking the line and scoring once more, leaving a very tense finish to come.

In the closing phases OC’s were awarded a penalty wide out to the get within the Deal half, having recovered from a knock sustained in the previous phase, Potter composed himself and calmly struck the ball between the uprights, ensuring OC’s left the south coast with the win. 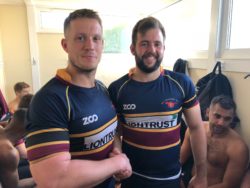 All in all a frustrating game for OC’s,  very rarely performing to their full potential and being out muscled up front for the majority of the game. However there were flickers of what OC’s are capable of when the ball is retained and game plans are stuck too.

However, a win was achieved and 5 valuable points gained, and so in that sense, OC’s returned to Horn Park from the coast with exactly what they went for.

The boys will get back to work this week in training and look to correct the issues in time for next Saturdays visit from the Aylesford Bulls.

Please make every effort to come down and offer the boys your support, we hope to see you there.