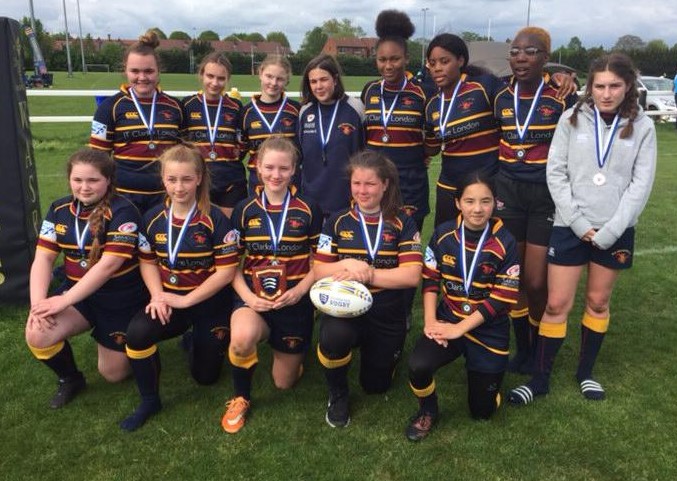 On Sunday, the Crimsons returned to Wasps FC to defend their U15s St George’s Day 10-aside Festival title. Playing against some of the best teams from across the country, not just London, meant that this talented side would really get to test themselves having dominated the Kent rugby scene all season.

They were a couple of notable absentees, but we took a strong squad to Acton ready for their first group games at 10.30am. After a slow start, our first game against Gosford All Blacks finished up with a 10-5 victory to the Crimsons. Tries were scored by Ellen and Natalie who were strong runners throughout the day.

Next up we faced Fullerians ‘A’. Lapses in concentration from the kick-off saw us concede an early try. Following this, missed tackles saw us concede again so we were 10-0 down after 5 minutes! Luckily for us, the girls shook off their nerves and started to put together the kind of rugby we’ve played all season – fast, free and skilful! This led to tries from Natalie and Iona. At 10-10, we had a scrum on the edge of Fullerian’s 22m which Lara took blind and scored in the corner to give us a 15-10 victory!

Our last pool game was against Basingstoke, who had a draw and a win to their name, meaning nothing less than a win would guarantee us a place in the Cup Semi-Finals. Again, some leaky defence saw us concede early but the girls got themselves back into the game through a try from Natalie. We then conceded again in a real yo-yo of a game, but further tries from Lara, Ellen and Gift (as well as two try-saving tackle from Lara at sweeper!) ensured we got a 20-15 victory.

Whilst the group stages had been less than convincing for the holders of the cup, we had managed to get the Semi Finals and found ourselves up against last year’s silver medalists – Old Northamptonians.

Contrary to the group stages, the girls were starting to get into their groove and were on the front foot straight from the kick off. An early run by Glory was deemed to be knocked on over the line but Crimsons maintained pressure in the ON 22 and scored through Natalie after a great run by Celia. Further scores from Glory and Ellen ensured we got through to the Final!

On the 1st XV pitch and up against a strong Grasshoppers – we knew we’d have to be at our best to retain our title. Losing Iona to injury in the first play of the game ensured this would be even more difficult! Having been camped on the Grasshoppers line for almost all of the first half, we were unable to get over and they defended very well. A breakaway try just before half-time (despite an outstanding last ditch tackle from Lara) meant that we went in 5-0 down at the break.

The second half started with a score from Grasshoppers and heads immediately dropped. Despite spirited defending and some lovely counter attack play, the Crimsons were unable to come back into the game and conceded a final try in the last play.

Coaches Tom and Joe were extremely proud of the performances that the girls put in. To get to back-to-back finals for St George’s Day and win the Kent X7s has capped-off a fantastic season for the U15s. As we say goodbye to a handful of girls who graduate to the 18s, there are also some excellent players coming through, so it’s an exciting time for girls rugby at OCRFC!