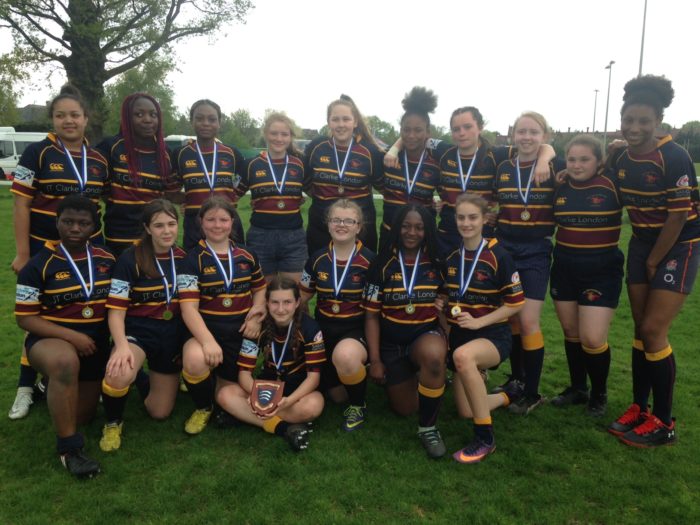 Enjoy reading below the sucesses so far of our newly formed Girls section at OCRFC….

This Sunday the Crimsons U15s travelled to Wasps FC in Acton to take part in the St George’s Festival, a prestigious event in which some of the best teams in the South of England take part. Last year’s winners Harpenden also won the National Cup.

The U15s had a tough pool – Aylesbury, Ealing and Pullborough. First up we had Ealing Grasshoppers who we’ve had some great battles with in the past. We were rusty as a team, taking a bit of time to adjust to the size of the pitch and the hot weather, but we managed to grind out a 25-10 win.

Our second pool game was against Aylesbury. Things were finally starting to click and we were able to manage a 20-0 victory. The girls were taking advice from the coaches and moving the ball to the wings really well.

We knew we’d cause teams trouble with our strike runners but it was our defence which was winning us games. Our pack (Mush, Ellen, Kianne, Charlie, Jamie and Chelsea) were causing our opposition all sorts of issues. I don’t think we lost a scrum all day, even on the opposition’s put-in!

Our final group game was against Pullborough, who we’d seen cause our previous opponents issues. At times, the game looked like it could go either way, however once again the Crimsons remained resolute and managed a 20-10 victory thanks to tries from Natalie and Lara, who were impressive all day.

Having topped the pool, a longish break gave us time to regroup and refuel. We were now in the knockout phase of the competition and despite a few bumps and bruises, the girls were determined to continue the fantastic work they’d done all morning.

We met Gosford and Grove in the quarter finals. The break had meant we had lost our groove and weren’t playing as fluidly as we had been previously. Despite this, the girls showed immense character and managed to grind out a 20-10 victory, Rebekah’s jinking try being the highlight!

Next up in the semis, we faced a physical Haringey Rhinos team that we’d previously lost to in a friendly, earlier on in the season. They were probably the most abrasive side we faced all day, however our outstanding defence kept their attack from functioning. Great tries from Natalie, Lara, Marianna and Mush resulted in a 20-5 victory.

Old Northamptonians were to be our opponents in the final. Having watched them in their previous games, they were very athletic and skilful side who played a really attractive brand of free-flowing rugby. What they hadn’t bet on is that there’d be 10 Crimsons ready to knock them backwards time after time! Early tries from Natalie and Lara gave us a well deserved lead. ON’s didn’t give up though and fought their way back into the game. Final score was 15-5 with ON’s scoring in the last play of the game, which was no less than they deserved. 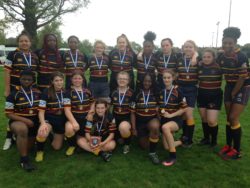 The final was played in great spirit which was indicative of the tournament as a whole – a lovely day out. I’m so pleased for the girls and thoroughly proud of them. They’re a pleasure to coach and I know Vicky and Hammy would agree with me too. It’s great to see them put what they’re learning during training into practice on a match day and it paying dividends.

Thanks also to all the parents who made the journey across London, your support was much appreciated. Special shoutouts to Helen and Eleanor (management), Kevin (minibus driver and assistant coach on the day) and Dave (first aid).

A strong Kent U15s side overpower Sussex with a commanding performance

The Kent Girls Under 15s beat Sussex by the remarkable score of 89-5 in Worthing last Sunday 18 November.

Two Crimsons were part of the team – Ellen starting as hooker and Lara first on the wing and then at outside centre. Both contributed to a fine performance with strong carrying in the forwards and fast and accurate passing releasing the outside backs to great advantage. And spectacular performance of the day was from the Kent number 11 who kicked over 10 successful conversions from every angle including the touchline.

The Kent coaches will have been delighted by the progress the already strong team has made in their weekly coaching sessions, and this match was a real testament to how far they have come since they were formed in October.

Kent’s final game in this three-match series will be played against Hampshire at Old Elthamian’s College/RFC grounds on Sunday 3rd December.

This Sunday saw us at the pitch up and play festival, where we ended up playing a 15 a side game against a combined team of Medway, Aylesford and Beckenham (we managed to borrow four girls from Sevenoaks – who our girls were so friendly and welcoming towards which was lovely to see).

The game consisted of 4 quarters: We started off slowly, finding our feet with girls out of position and also with the four Sevenoaks girls. The ref did make hard work of it, but we stuck with it, and started running in the tries. Our six tries were scored by Laianni, Chelsea, Natalie, Jamie (x2) and Mush.

Chelsea managed to kick a conversion on her first attempt which was great to see!

Apart from just a couple of linebreaks that were tracked back (amazingly by Laianni on one), Medway never really looked like they were going to score. Our linespeed was good and we were hooked up in defence making some brilliant tackles and turning the ball over on lots of occasions.

Unfortunately we went down to 14 due to injury in the last few minutes, and Medway finally got a score in last play making the final score 32-5.

Well done to all involved. Great commitment, loads of improvement across the board but also lots to still work on.

Congratulations to the three Crimsons U15s – Lara, Ellen and Kianne – who made their county debuts today for Kent Girls U15s vs Hertfordshire at Herts RFC. 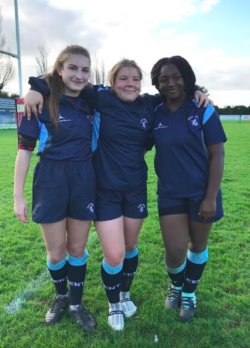 Their personal rugby journeys reflect the diversity of the Crimsons as a group: Lara technical and experienced from Old Colfians Minis alongside Ellen and Kianne whose power, athleticism and willingness to learn have meant their inclusion with the best girls of their age in the county after only one full season of playing rugby.

All three contributed to a fine display from Kent in a match of pace and high physicality which Kent had to come from behind to win. Herts started strongly and were leading the opening quarter before Kent’s pacy back line began to profit from the quick ball their dynamic pack won them to pull away to eventually win 38.29; two late tries at the end from Herts giving a closer score than Kent’s attacking performance deserved.

Lara tackled strongly in the midfield, passing and offloading well to the outside backs. Kianne and Ellen both scrummaged well in a dominant pack. Kianne won several turnovers in contact. Ellen was prominent with close driving play for ‘hard yards’ with ball in hand and saved a try at the end. Ellen and Kianne picked up a couple of knocks defending bravely from which we wish them both a speedy recovery!

The Crimsons U15 had a great start to the season, winning every game at the Dartfordians’ Festival this Sunday. Game 1 v Dartfordians was a 3 -0 win for us, with Lara leading from the front and scoring twice. Chelsea also bagged herself a try. It was good start for everyone, but I could tell we were only just getting warmed up and there was lots more to come!

The 2nd game was v Medway. Another 3-0 score, showing how great our defence has become and that it’s a huge strength of our game as understanding is growing in that area. Ellen dotted down twice, and Kianne also got herself on the scoreboard.

Game 3 was against Tunbridge Wells, who really showed us how to play last year and beat us quite easily when we went to their place. A few of the girls seemed to have concerns as they remembered losing to them, but I assured them, the way they were playing they had nothing to worry about. So with big smiles on their faces after two great wins, they took the field with lots of enthusiasm and started walking in the tries! They managed a 5-2 win with two tries from Jamie with some strong ball carrying, Lara got another with her dancing feet, and both Prosper and Lianni also powered over the line.

Our final game was against Aylesford and we managed a massive 10-1 win to finish the day with an incredible four from four! Lara and Ellen got three each, with Mush, Lianni, Chelsea and Marianna all adding to the score line.

Overall, an incredible day. Both Tom and I are hugely proud of how far you’ve come over the last couple of seasons and today you were all amazing! Let’s keep up the hard work, and continue to improve- as winning is always far more fun than losing!

Congratulations to Ellen who won players’ player for her top efforts today. I hope you all enjoyed it as much as we enjoyed watching!

The Due to illness and unavailability the Crimson’s U13 no’s were depleted for this outing. The three Crimsons who did come though made great contributions to the Baa-baa team they joined and made it through to the second stage of the tournament. Only going out at the semi-finals.

Their Thanet coach who lead the team on the day commented on Jasmine and Glory’s great pace with both scoring and making countless runs and on Sadie’s strength and skill. She also congratulated them on their great team spirit and enthusiasm. Well done girls. You were a credit to the club.

The U13 Crimsons showed great spirit and tenacity at the Beckenham Festival this Sunday, showing much improvement as the afternoon went on. We had six girls running out at, three playing in their first tournament. Ably led by Glory, Ellie, Jasmine, Bieber, Matilda and Tamsin all acquitted themselves with great enthusiasm and commitment in some challenging games against some experienced sides. Two wins out of five games is in no way a reflection of the great strides the team made during the afternoon; Both Glory and Jasmine scored some superb long range tries, the last against Dartford involving a superb offload. Ellie and Biba never stopped tacking, while Matilda and Tamsin showed some pace and elusiveness out wide. We have the makings of a great team here.

Great contributions from the Crimsons U13s at the Dartfordians Festival

Biba, Sadie, Glory and Ellie all had a great tournament at the Dartfordians Festival. This was the first outing of the season and our U13s acquitted themselves very well teaming up with four slightly more experienced girls from Sevenoaks. They won a great opener against Deal/Beccs, but then playing some experienced sides in Aylesford/Medway, OAs and then finally Tunbridge Wells. The girls were competitive in all these ties and they formed a fantastic bond with the Sevenoaks girls. The attitude and spirit were first rate.

There were really great contributions from all the Crimsons sharing out the tries between them all but especially in defence, with some fearless tackling faced with some physically strong and fast girls. There was great communication between the girls all day and this was epitomised by the second half fight back against a strong Tunbridge Wells side that led to a couple of tries scored in the corner set up by Crimson passes. Well done all.

We use cookies to ensure that we give you the best experience on our website. If you continue to use this site we will assume that you are happy with it.Ok