Courageous Crimsons U15s get the ‘w’ at Dartfordians 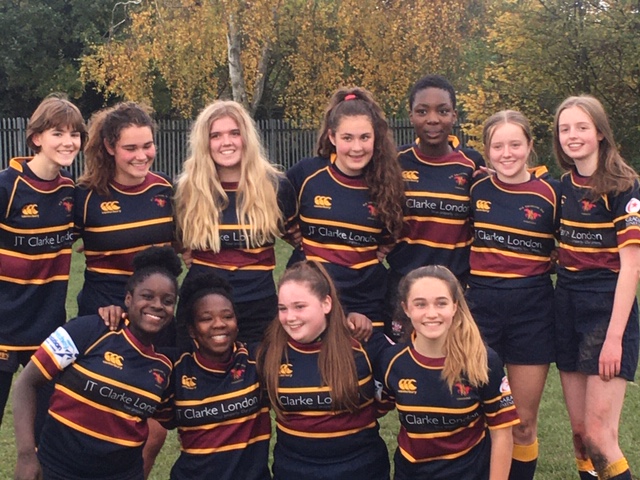 This week’s fixture saw the Old Colfeian’s UI5s Crimsons travel along the A2 to Dartfordians. The ever present hurdle when playing at Dartfordians was parking, with the team’s vehicles scattered from Bexley to Hall Place. Eventually the team rendezvoused at the ground but were welcomed with the news of the dreaded trek up to Beths School. On completing this the Crimsons could begin their warm up and prepare for the match. With only 10 players, the possibility of ‘borrowing’ some of Darts players were very much on the cards, until Alice saved the day arriving just before kick-off. 11 vs 11; game on!

A very unlikely fast start for an Old Colfeians side saw our second row, Glory, run almost the length of the after only 2 phases from kick-off. I think I recall at least 2 Darts players hanging off of her legs as she powered across the line.

This early score seemed to awaken the Dartford side as a prolonged spell with the ball, coupled with a couple of penalties led to a test for the Crimsons’ defence, which stood strong and looked comfortable. However, an impressive individual effort from the Darts’ number 12 took advantage of a narrow defence and scored in the corner.

With that score, Dartfordians continued to have possession of the ball, but the dedicated and very physical defence of the Crimsons especially the second rows of Glory and Olivia, stood strong. This led to Sienna swooping over a ruck and stealing one of her many turnovers of the game, allowing her to catch Dartfordians scrambled and score a counterattacking try.

Just before half time, the Crimsons’ then capitalised on the small amount of possession they had had, and with some neat hands down the line, saw Bolu score her first of the match, which would prove to be her easiest…

The beginning of the second half saw a similar story to the first, with the Crimsons happy to tackle the Dartfordian ball carriers and send them backwards, with the props Isabella and Sophie leading the way. These positive tackles allowed Siena to once again steal the ball at the breakdown, finding Joan who identified the space brilliantly and fed Bolu who ran the length of the pitch to score a great try.

Sophie took the conversion – a sight to behold: a front row slotting over a conversion, one that should be seen more often.

After another period of pressure from Darts and further tackling practice for the Crimsons, Sadie typified the dominance of the Crimson pack with a brilliant counter ruck. This allowed Bolu to score her 3rd of the match, an almost identical try to her 2nd carrying like a natural number 8, a position she hadn’t previously played.

Finally, the Crimsons experienced some time with the ball with the forwards carrying hard, coupled with a dangerous and illusive backline of Joan, Florence, Jessica and Alice. However, maybe the only negative of the game was the Crimson’s handling in contact. The result of this were many scrums, where Darts were firmly in reverse gear with the Crimson pack continuing to show dominance. However, with Dartfordians going backwards in the scrum, we saw the ball fly out of the side and the Darts scrum half run half the pitch to score under the sticks.

Overall a very impressive performance from the Crimsons U15s. At the beginning of the day with only 11 players, it could have been easy for the girls to lack interest. Also coupled with the fact there was no luxury of subs, every girl who played should be proud of their performance. Special mentions to Florence and Jessica who are both relatively new to the club and rugby, but were as important to the win as the other 9 girls. This result can be the start for the U15s to really kick on, as if we can do that to teams with only a bare 11 players, imagine the success we will have with a squad of 20+!

So, if you’re interested in playing rugby or know anyone who is, let them know that Old Colfeians and the Crimsons is the place to be!