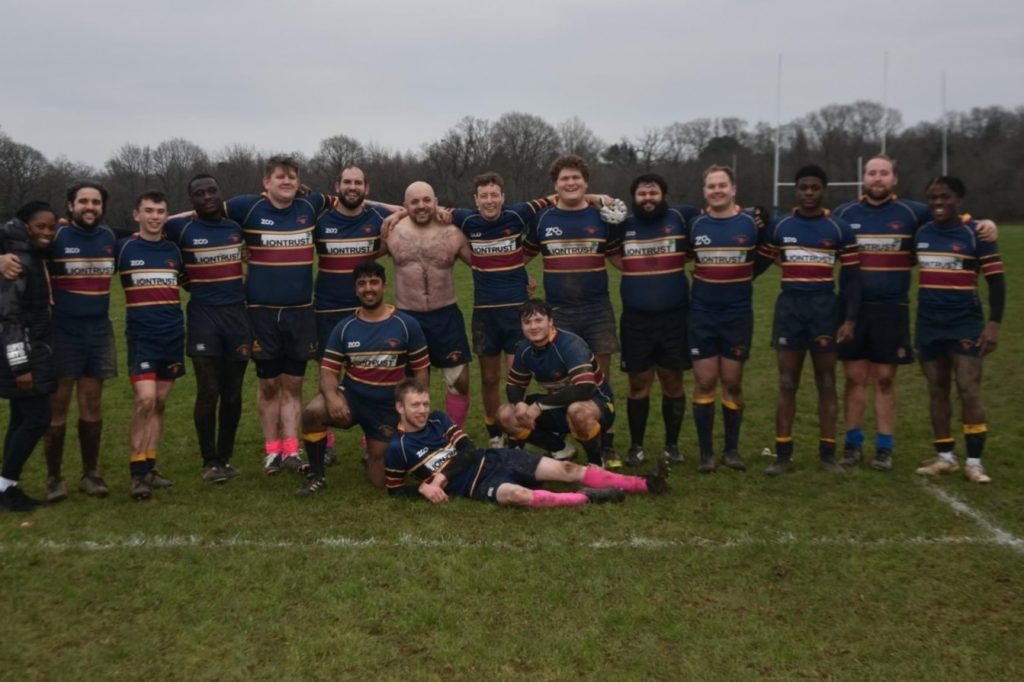 Saturday 22nd January marked the halfway point for the 3s’ season, with our first return fixture. Park House went down 15-12 when they came to Horn Park Lane in October in a classic Autumn arm-wrestle. As always with third team squads however, it was a vastly changed side that travelled to Bromley for the second game, so little should be read into the form book (which is just as well, since Park House are top of Kent Met 4, and we’re floating around in the middle). With a few injuries to key individuals, the returning 3s veteran Coxy claimed the much-prized 10 shirt. Young guns Ben Fleckney, Timi Agbedi and Daniel Iyola on loan from the Colts padded out our backline with a bit of pace and flair.

Despite a promising warm-up and improvised new lineout, OCs failed to match the energy of the high octane, powerful and efficient Park House pack from kick-off. The hosts dominated possession and built a lead based on strong forward carrying, cut-backs off 10 and fast recycling. This led to an impressive Park House lead early in the half, much to the delight of the large crowd on the sideline. The Colfeian fightback was spirited, but careless mistakes on the Park House tryline repeatedly undid all the hard effort (leading to predictable jeering from the home crowd). The Park House playmakers enjoyed a very strong afternoon with the boot, punishing Colfeian turnovers by pinning us far back into our half. Strong counterattacks led by Ade from fullback gave us hope, but second and third phases ultimately fizzled out when poor handling let us down. The late arrival of Will Walker shortly before the end of the half, like Gandalf at the siege of Helm’s Deep, provided much needed fresh legs but despite this the half concluded as it began – with Park House running in more tries against a demoralised (and frankly sloppy at times) Colfeian defence.

At 35-nil down, we desperately needed to reassess our approach. And fortunately, we did. Leading the charge from kick-off, Will’s secure basket under the high ball finally gave us the platform we required to play off. At last, we were able to put the Park House defence under some pressure. Strong carries and clever offloads, particularly from Will and Cricky, started to create space for Ben and Coxy to run our backline. The Colfeian front row of Danny, Goody and Eric gained the upper hand on the now wheezing Park House pack. Raj raced around the park, linking on the attack and snuffing out every chance of a Park House counter. Repeated pressure on the home tryline led to Nick opportunistically squeezing through for a couple of tries, restoring some pride to the Colfeian shirt. Murmurs of unease began to spread through the spectators.

However, the visitors were not done yet. Continuing to dominate possession (much as the hosts had done in the first 40), Coxy began to play with more width – finally allowing Ade, Timi and Daniel to showcase their pace and glide through the now porous defence to score a try apiece. Park House pulled a try back, but this was unable to quench the almighty Colfeian comeback, with Goody blasting through feeble tackling to offload to Nick on the line for his hat-trick. Suddenly, ridiculously, we were just two points behind. The vast crowd were silent.

With just 10 minutes left on the clock, Ben slotted a lovely three points from the tee, to take us one point ahead. Park House finally decided that they needed to pull their fingers out, but in their panic they were easily turned over and Daniel on the counterattack raced down the touchline to score our seventh try. Ben duly converted to put us 8 ahead, capping off a majestic kicking display.

The final play of the game belonged to the Park House number eight, a constant thorn in our side for the full 80 minutes. A strong blitzing run through a turning Colfeian defensive line allowed him to dot down in the corner, so at the finish of the game 45-48 to us was a great result..

A huge thank you to all the boys who played. A slow start, but a demonstration of real grit to come back so far. An extra special thank you to the new caps who stepped up and dominated the game.