A strong win for Crimsons U18 girls against Beckenham 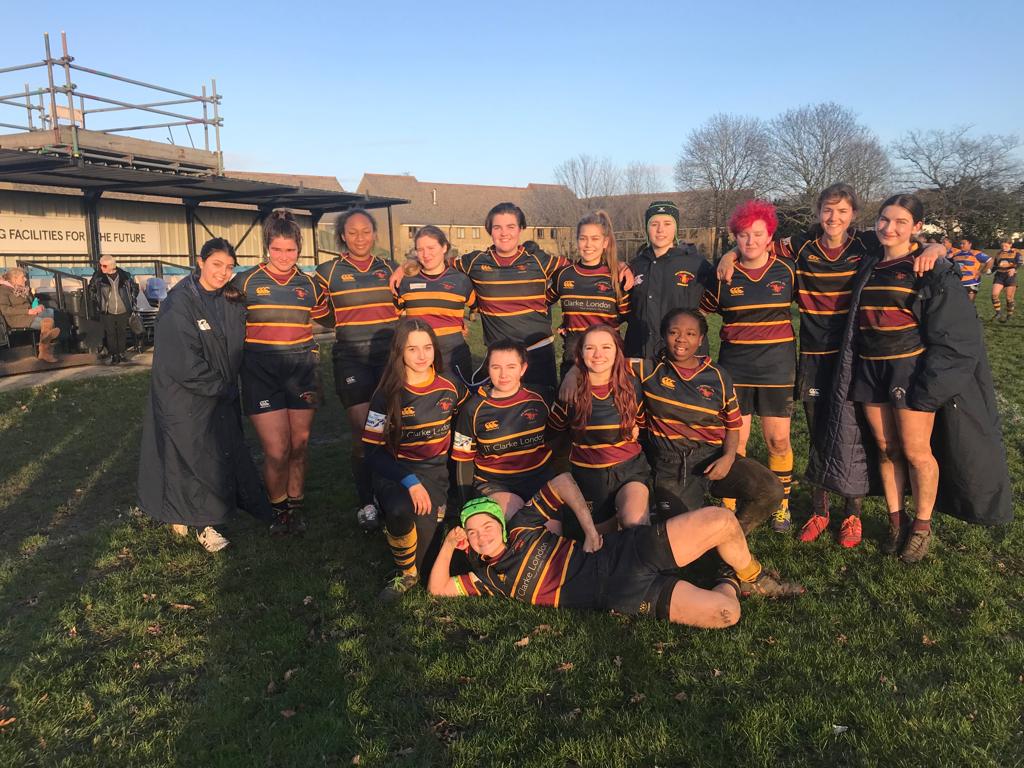 On Sunday 9 January the Crimsons/Sevenoaks combined U18s squad took on Beckenham at home.

On a day that was bright and crisp after downpours the day before, Beckenham started strongly and caught the Crimsons napping and for the first five minutes, the Crimsons were defending on their tryline.

After a large number of phases, there was a turnover which found its way out to Hannah. A great run down the wing got the Crimsons into the opposition 22 but the support was lacking. But a few phases later Hannah was over in the corner. 5-0, no con.

The second score came from a lovely pass from Olivia to Lara who sailed past two defenders to score. 10-0, No con.

Right from the kick-off Amy made a strong run up the middle of the pitch, but again there was no support and Beckenham got the turnover.

Beckenham came close to scoring, but lost the ball a few metres out, and Crimsons once again had the ball. That was pretty much the story of the first 15 minutes, and just three phases later, the ball was ripped from The Crimsons in contact.

Some great defence from Marianna, making three tackles on the bounce followed by diving on the ball to turn it over, won the ball back for the home team. However, a phase later, another penalty was given away by the Crimsons. Beckenham kicked to touch and had a lineout 15m out. But the Crimsons put in a huge defensive shift again 10m out with some big tackles coming in from Ellie and Joan. Then a crunching tackle from Natalie who got off the line hard and shut down the opposition. It looked like it was going to go the Crimsons way, but they were then give another penalty for not rolling away.

After the kick to touch, Beckenham found themselves again just 10m out. Their lineout was functioning well and they built the phases to come within 5m of the tryline. A knock-on from the visitors gave the Crimsons the ball back, and they made the most of their strong scrum. A minute later, Izzy made a storming run and offloaded to Joan who made it into the opposition half.

With 20 minutes gone, the ball had been back and forth with equal amount of possession to both teams.

At 22 mins in the Crimsons showed their strength again at the scrum and got one against the head. All the hard work was however undone losing the ball yet again at the breakdown. Beckenham soon made their way up the pitch with some big ball carries. Again, the Crimsons found themselves camped on their tryline but a double tackle from Lara and Alice put the ball into touch. Great defence to keep them out in the last play of the half. 10-0 half time.

The second half started well, with a turnover from Lara who was strong in the ruck, followed up by a fantastic run from Lonnie. But the ball was then lost and Beckenham pounced, seeing an unorganised defence and scoring their first. The conversion was good to bring them within three points of the hosts. 10-7

The Crimsons chased hard at the kick off and had soon regained possession. Another good bit of interplay between Izzy and Joan saw Joan sailing over for the Crimsons 3rd. The conversion was just short. 15-7

Izzy then backed up her form with another big carry. The ball was moved to Lara who kicked into the 22. A good chase from the Crimsons saw the next bit of play in Beckenham’s half.

Beckenham had the scrum, but The Crimsons managed another turnover and moved the ball through the backs and out to the wing. Great hands then back the other way from Olivia but there was a knock on 20m out.

Beckenham fought hard to keep possession off the scrum, but pressure from Faye caused the ball to be knocked on. Jocelyn moved the ball from the breakdown to a charging Izzy, who gave an out-the-back offload to Lucy to score. Conversion from Lara was good. 22-7

The Crimsons seemed to have built in confidence from the first half started to move the ball a bit more and find some space to run into. Natalie burst through the middle and offloaded to Izzy, the ball was given then to Olivia and she floated it across to Lara who was stopped just 5m out. Beckenham managed to kick the ball away but with a slow chase; the Crimsons struck again by building the phases and Lara finished by skipping through a couple of defenders to score another. Conversion good. 29-7

Beckenham returned the ball to the Crimsons, and this time with a great kick chase, managed to win the ball back and keep hold for some great play through their forwards. A big carry from 10m out with their player brushing off a couple of Crimsons defenders led to the second score for the visitors. Conversion good. 29-14

With only five minutes to go, the Crimsons showed great work rate for each other chasing down one of Beckenham’s fliers. With numbers to the breakdown first, the Crimsons got the ball back and a lovely pass from Lara saw Hannah in space sprinting down the wing.

Some really good play from the hosts ended with a turnover in the opposition 22, and one of their players down getting treatment.

Into the last minute of the game, and after some dancing feet 10m out and was a hatrick for Lara! She also converted her own try. Final score: 36-14