A great day for the Crimsons U13s at the Kent Waterfall Festival, hosted by Folkestone RFC 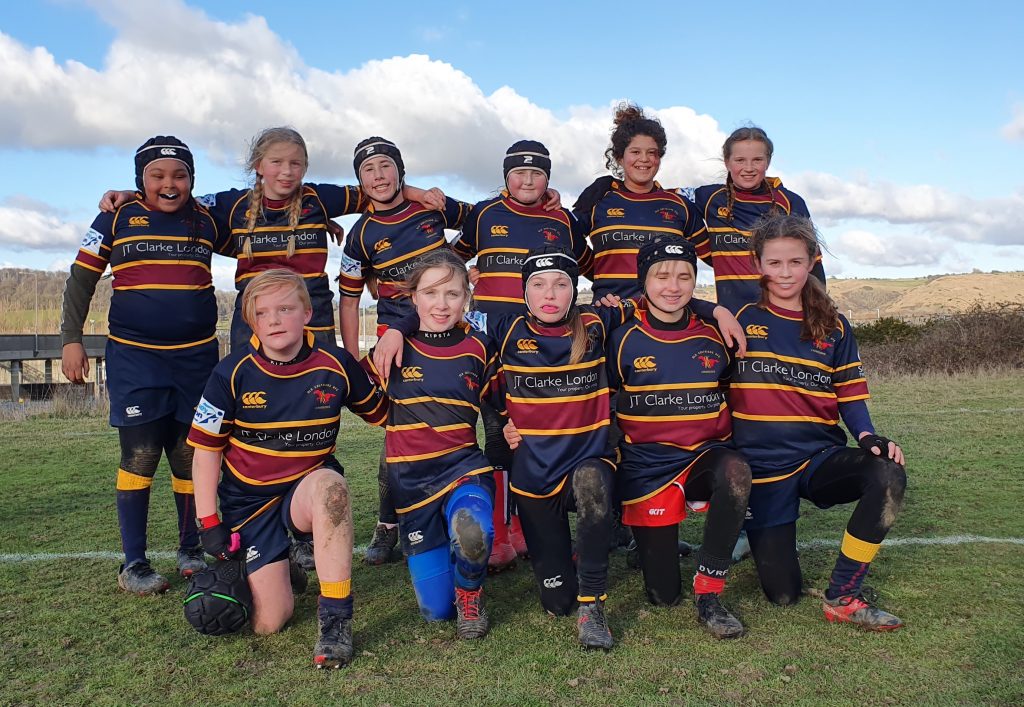 Last Sunday the Crimsons U13s travelled to Folkestone for the Kent Waterfall heats. After a late withdrawal by one player the night before, the Crimsons were left with 11 players, including the girls from Dartford Valley.

First game was Old Alleynians. A very fast start by the Crimsons, saw them race into an early lead, which they didn’t let go. The girls took advantage of some excellent possession and recycling to run in 7 tries. Final score 35-0. Try scorers Emer x 6 and Grace.

Game 2 was Sevenoaks.  This was a much sterner test for the Crimsons. Sevenoaks proving much more organised in defence and attack.

Great rucking and ball recycling eventually told with Crimsons breaking the deadlock first after nearly 5 minutes of play. Defence was key in this game, as Sevenoaks had some hood possession. The girls were tireless in defence and counter rucks saw us turn the ball over at key moments.

Gaps appeared in the Sevenoaks defence and we stretched our lead. Final score 20-5 to Crimsons. Try scorers Mia, Emer x 2 and Shiannte

Game 3 was Channel Baa-Baas. Again, the games seemed to get tougher, but the girls just seemed to respond and lift their game.

Baa-baas had a couple of big ball carriers and their game focused on them. Defence from the Crimsons was outstanding and counter rucking saw us turn the ball over 4 times in the first half alone!!

Tackles were awesome across the pitch with is never letting them through. Once Crimsons had some space, they powered over for multiple tries. Final score 30-5 to the Crimsons.  Try scorers Emer x 3, Charlotte (Baa-baas loanee), Emily B and Grace

Game 4 vs Medway. Injuries were starting to tell from the commitment shown in the first 3 games. Mia and Maisie missing the game. So we were down to 9. Libby and Emily O volunteered to play for Medway, even though Libby was injured. Thank you very much girls, great rugby spirit.

Medway had 6, so we shared 2 players. The game was a scrappy affair and the girls were tiring from all their efforts.

Crimsons raced into a 3 try lead, but tiredness and a few decisions against us led to Medway coming back to draw level right at the end.

All in all a great day for the girls and a very easy day to be a coach!!

Thank you to David from Dartford Valley and to Lisa for patching up our injuries.