A big win for the Crimsons U18s against Medway 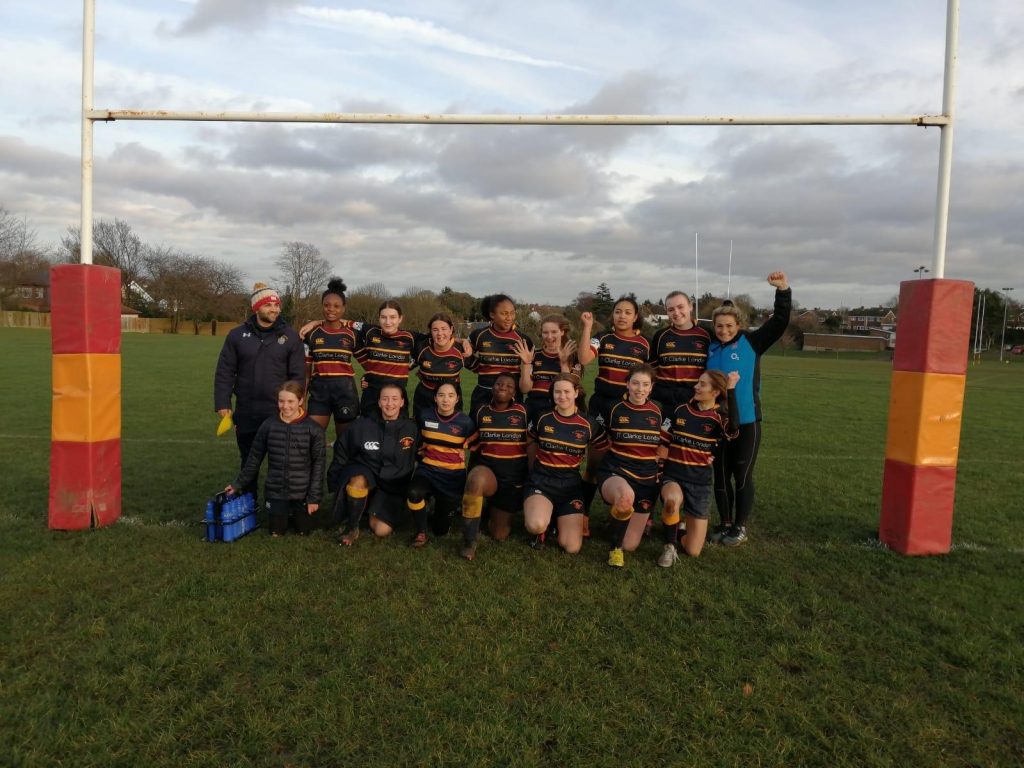 On Sunday the Crimsons U18s made the trip to Medway and played some fantastic rugby before the Christmas break.

The Crimsons got off to a great start with a line out steal from Becca. Amazing movement of the ball with offloads caused 3 penalties in a row which led to the first score with Natalie diving over: 5-0.

Huge defence from marianna caused a knock on. Crimsons got the scrum and with an 8 pick from Natalie, she dived over again 10-0.

The Crimsons pack showed their dominance with a great turnover at scrum, and then some lovely movement of the ball from Iona to Lara and out to Prosper who unfortunately got a foot in touch.

Medway then pulled the deficit back to within 3 points with some good strong carries and although Natalie was almost under the ball, they managed to control it down.  Conversion successful: 10-7.

A forearm to the face from Medway saw the Crimsons get a penalty. There was some beautiful movement of the ball from Juliette to Lara down the wing, whose dancing feet helped get Prosper into space. It was finished off with with an offload from Natalie to Chelsea who dived over.  Conversion successful from Iona: 15-7

This was backed up by a storming break from Natalie straight from kick-off who ran the whole way, offloaded 5m out to Prosper but called back for a knock on!

The Crimsons managed to get the ball back, but gave it back easily with another knock on. But the Crimsons yet again proved too strong at scrum time and turned over another, gaining a penalty and Prosper dotted down: 22-7.

Medway put together some great phases and the Crimsons defence kept putting in hit after hit and made them work hard for it. But the Crimsons gave away a penalty and with a quick tap, Medway crashed over and scored: 22-14.

The Crimsons managed a crucial turnover at scrum time, just 5m out from their line, and with a huge carry from Natalie, Crimsons were in the oppositions’ 22. Natalie offloaded to Prosper who ran in her third of the day, but was unfortunately called back for a forward pass. But Crimsons got the ball back after a few phases, moved the ball and get another score: 27-14 .

Yet again, Crimsons saw themselves in their own 22, but found a way to get out. Natalie charged from Medway’s 10m all the way to score. The ball fell off the cone 3 times, so Iona decided to drop kick which was successful: 34-14

Some slick hands from Juliette to Marianna led to some great offloading, leading to Lara soaring in to score: 39-14.

The Crimsons then showed their strength in defence, with a huge hit from Amy, and Marianna dived on the ball to win the turnover.

Aimee then made a 50m break with an offload to Lara. The ball was moved to Becca who made a line break and Mouch scored to finish the game: 44-14

Player of the match: Aimee Finn

Amazing game from the girls, hope everyone has a wonderful Christmas. Look forward to seeing this game backed-up in the New Year!