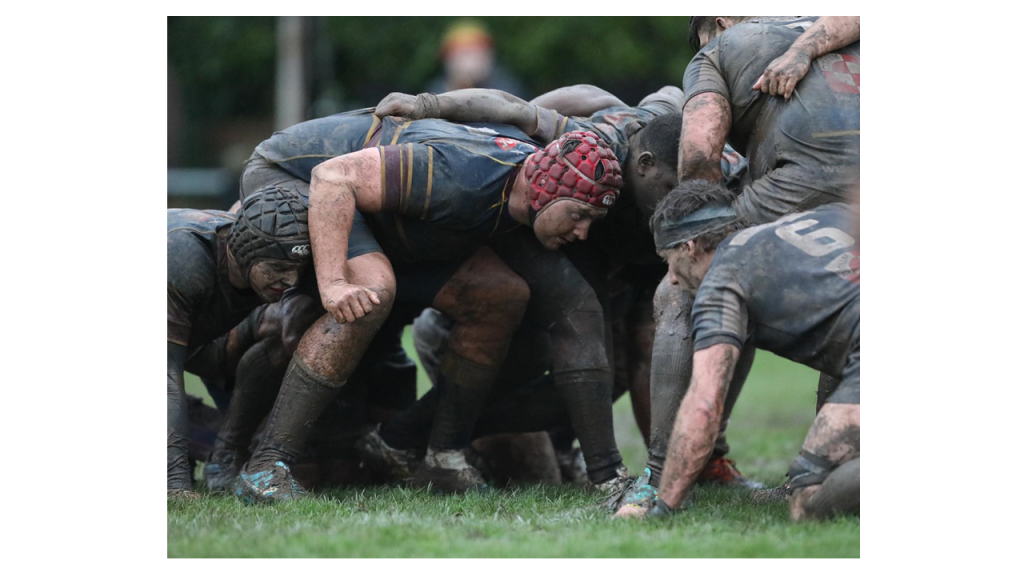 After an enforced extended break, OCs started the New Year with the long journey to the Kent Coast. With conditions best described as if you chose to put up an umbrella to stop the torrential downpour, you’d probably end up being carried to Calais with the sideways winds.  After strong words from John Fletcher and Fred Humphries reassuring the team that they “Love these conditions”, it was time to kick off.

The half started as to be expected, back 3 players from both teams playing kick tennis. With a strong set piece and ill-discipline from the home side, OCs gained good attacking field position. A lineout deep inside Deal’s 22 and a well-constructed maul rampaged towards the try line only to be cynically brought down resulting in a penalty try and yellow card.

With conditions only getting worse, OCs still attempted to throw the ball around culminating in a penalty just inside the away side’s half, slotted over by the Deal player.

From this Old Colfeians began to play the type of rugby that was more at home on an early January afternoon. Pressure in Deal’s 22 led to another infringement, this time the ever-reliant Jack ‘slotter’ Potter knocking the 3 points over.

As the half came to a close, the East Kent side’s kicking game improved giving them vital attacking field position that was mainly enjoyed by OCs in the first 40. Despite strong defence by Bamidele Agorioge and Oladipo Ariyo, the Deal forwards kept the ball for multiple phases and carried over for the score.

After managing to get the backs and (some of the forwards) out of the warm shelter of the changing rooms the 2nd half was underway. This half started just as the 1st had finished, with Jack Potter placing an expert kick exploiting the 50/22 rule. Armed with a consistently strong maul, Brandon McMillan was not to be denied a 2nd time and finished off the drive with the score.

With the away side building a more comfortable lead and coming to terms with the conditions, they began to play the rugby that has placed them at top spot. Dominant carries by Charlie Clay’s best mate Bamidele Agorioge and Charlie ‘where’s the Bear’ Baker put the home side on the constant back foot. A well placed grubber through saw the try machine Connor ‘CM11’ McDonald touch down in the corner, proving he can do it on a wet and windy afternoon in Deal.

As the half continued the OCs backrow became more of a nuisance around the break down with Bea McMillan and Will ‘Jiggy’ Smith proving maybe his hamstrings could deal the cold weather… Alongside this Jack Potter continued to put the ball on a dime with his boot, showing in a precise crossfield kick snaffled up by Connor McDonald then popped of the deck to Ollie Burkett running a good support line to score.

With the game drawing the a close and conditions deteriorating both sides had faced an unusual challenge, difficulty in working out who was on your team. Reaching a point where players would just tackle anybody running towards them and Andy ‘Sugar’ O’Malley proclaiming “who the **** is on my team”. Despite this a strong carry by Brenda McMillan and offload by Oladipo Ariyo saw Dan Wood touch over the line to finish the game.

A very strong performance by the Old Colfeians side, breaking the tradition of the usual slow start to the year. This victory leads the 1st team into a vital month of rugby which will have a huge impact in the promotion picture come April.