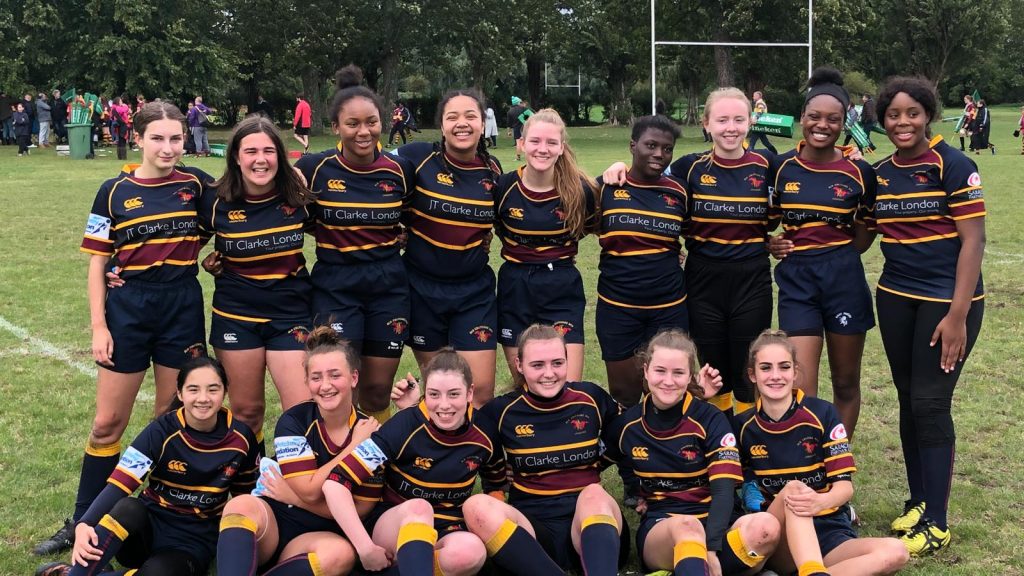 On the back of two good wins, the Crimsons U18s travelled to Dartford for their first cup match of the season.

In squally winds and showery rain, the conditions looked to favour the home side with their powerful pack intent on a direct style of rugby with which to take the Crimsons head-on.

The opening plays of the game saw Dartfordians’ strong forwards repeatedly taking short passes and looking to break through the Crimsons defences close into rucks and mauls.

However, the Crimsons not only withstood this pressure, but took the initiative with several resolute tackles, repeatedly halting Darfordians’ progress. With two shuddering tackles by Aimee, they drove them backwards and turned the ball over.  Defensively, Marianna, Iona and Lara were not far behind Aimee in the intensity of their tackling and commitment to regain possession.

When the Crimsons’ forwards secured possession, their backs were far quicker to attack, with excellent passing and fast transfer of the ball to space which resulted in long distance tries for Natalie, Mouch and Iona.

In a closely fought first half, Darfordians’ pressure was rewarded with a try of their own, from a run off the back of a five-metre scrum.

The second half saw a continuation of this pattern of play from both sides, with several heavy driving runs from the bigger Dartfordians pack which were repelled determined tackling. Then when the ball was won, the Crimsons were far sharper in their handling and running and so took advantage to score further with tries from Mouch, Natalie and Lara.

The Crimsons didn’t have it all their own way, with Dartfordians scoring two tries from close-range scrums, despite Natalie driving back the Dartfordians’ number 8 twice in quick succession.

This was an excellent performance by the Crimsons especially as they were at times reduced to only 13 players; typical of their sprit on the day was Charlotte returning after time out to recover from bruised ribs to shore up the scrum in the front row. The Crimsons’ courage and tenacity in competing throughout the match was a testament to the whole squad. Equally praiseworthy was their ambition to play an attacking, running style of rugby, and their skill in executing to such good effect in difficult conditions against such strong opponents.